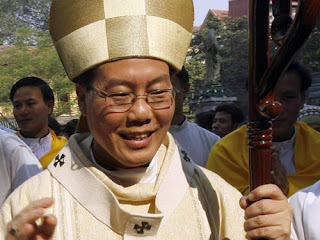 09/26/2008 17:17
In response to the president of the people's committee of the capital, asking that he be punished and transferred, the episcopal conference affirms that Archbishop Kiet "has done nothing against current canon law".

Xuan Loc (AsiaNews) - The archbishop of Hanoi, Ngo Quang Kiet (in the photo) and the priests of the parish of Thai Ha "have not done anything against current canon law": this is the blunt and unwavering response that the Vietnamese bishops' conference has sent to the president of the (municipal) people's committee of Hanoi, Nguyen The Thao, who had asked for the "severe punishment" and "transfer" of Archbishop Ngo Quang Kiet.

The statement of the Vietnamese bishops was made public today, signed by the president of the episcopal conference, Bishop Peter Nguyen Van Nhon. It was released at the end of the annual assembly of the bishops, which concludes today.

The note, sent also to the president and prime minister, responds to a letter from Thao dated September 23, in which the bishop and religious are accused of “inciting riots, falsely accusing the government, disrespecting the nation, breaking and ridiculing the law, and instigating others to violate it”. The four priests named by Thao are the same ones "warned" by the president of the people's committee of Hanoi.

In another statement, the Vietnamese bishops highlight other problems in the country, like the unjust appropriation of individual and Church property, the spread of naked corruption, injustice against the poor and against believers, repression against the people and against religion, the abuse of force on the part of the authorities, and the dishonesty of the state media.
Labels: Asia News Công Lý và Hòa Bình Hội Đồng Giám Mục Việt Nam Justice and Peace Tổng Giáo Phận Hà Nội