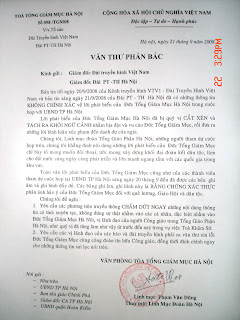 Archdiocese of Hanoi
Office of the Archbishop of Hanoi
No. 098/TGM/08

Re: To denounce Vietnam State Television and Hanoi Radio-Television

On the Sep 20 Channel VT1's Evening Newscast of the Vietnam State Television and on the Sep 21's Morning News Program of the Hanoi Radio-Television, there have broadcasted INCORRECT information in reference to the statement made by Archbishop of Hanoi during a meeting at the People's Committee office.

In fact, the Archbishop's statement was TRUNCATED, and TAKEN OUT OF CONTEXT in a deliberate attempt to fabricate then defame the innocent archbishop, paving the way for series of criticism against him.

We as the college of priests in Hanoi archdiocese, delegates at the aforementioned meeting, affirm that the content of the archbishop's statement had only expressed a desire to have a dialogue, a wish to see the grand-union of Vietnamese people in order for our country to be as developed and prosperous as the neighboring countries.

Full texts of the Archbishop as well as of the delegates participating in the meeting with the Hanoi's People committee on September 20th were recorded by both sides. These recordings would serve as AUTHENTICATED PROOFS for a reflection of a good will from the archbishop toward his homeland and his Church.

We therefore request that:

1. The news media IMMEDIATELY STOPS publishing information of distortional, untrue nature aiming at any particular individual, especially at the Archbishop of Hanoi, a spiritual leader of the Catholic faithful in Hanoi archdiocese as they have done so in the past.

2. The executives of the newspapers as well as television stations must issue a letter of apology to the Archbishop of Hanoi, and to the Christian community; they also have to make corrections right on those regrettable mistakes.

Office of the Archbishop of Hanoi,
Rev. Pham Van Dung
(Signed and sealed)
On behalf of the College of Priests at Hanoi Archdiocese