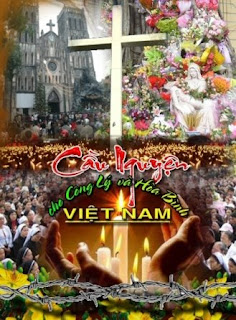 7,000 people took part in a prayer vigil during which participants express communion with Hanoi Catholics, victims of a vicious attack by city authorities and the Communist Party.

HO CHI MINH CITY(AsiaNews) – 7,000 Catholics held a vigil in Ho Chi Minh City during which they prayed for those who “persecute us”, urging people to leave the “house of violation,” expressing their communion with the archbishop of Hanoi and the priests of Thai Ha, increasingly targeted by more vicious attacks by Hanoi City authorities and the Communist Party.This is the largest demonstration ever seen since the Communists took over the city in 1975.

The vigil is taking place around our Mother of Perpetual Help Church. Many of the people who have come are young; they are here despite a memo sent by Nguyen Van Ngai, deputy director of the city’s Education Department, asking schools to “prevent bad elements among the students from participating in anti-government demonstrations.” Dated 24 September, the note urges official to pay close attention to the period that goes from 24 to 28 September.

This has raised concerns because the dates correspond to the time frame of a rumoured “drastic action” the authorities are said to be preparing against Catholics in Hanoi. In fact even the Bishops’ Council of Vietnam is ripe with such fears.

The vigil began at 7 pm but the area was already full by 6. Father Dominique celebrated Mass, urging “Vietnamese Catholics to leave the house of violation for the house of peace.” Catholics, he said, must “rid themselves of pressure, anger and hostility in order to love and pray for those who persecute us because they too are our brothers and sisters.We live in Jesus,” he added.In this context priests, men and women religious and the lay people prayed for Mgr Ngo Quang Kiet, archbishop of Hanoi; Fr Vu Khoi Phung, parish priest at Thai Ha; the Redemptorists and the clergy and laity living in the parish. They prayed for justice, peace and truth in Vietnam.

Sadly, the Vietnamese government and media have not understood what Catholics want.Like their fellow citizens Catholics want to see Vietnam develop its economy, culture, society and political stability.Instead in the last few days state-owned newspapers and TV stations have misinformed the public with regards to the “prayers for peace and justice offer by lay members of Thai Ha parish.”
The government is under the impression that the former are trying to challenge local authorities. City officials unleashed a mob of a hundred thugs who threatened people who came to their church to pray, shouted obscenities at men and women religious, spit in the face of one in particular, ransacked the church and shouted well into the night that they wanted to kill Father Phung and the archbishop.

In fact all that Catholics want is justice and peace from the nation’s leaders.During the vigil the statement issued by the archbishop of Hanoi was read out fully, unlike the distorted version reprinted in the print media.

Card Jean-Baptiste Pham Minh Man, archbishop of the country’s largest city that was once known as Saigon, gave instructions for his colleague’s letter to be read out during Sunday Mass.People want the government to put an end to the press campaign against Catholic priests, faithful and Church; instead they want the authorities to respect their own laws and let the properties in dispute go back to their rightful owners.